Hazle Township and surrounding communities feature a variety of activities for all seasons.

Hazle Township Community Park is positioned right in the middle of Hazle Township near the Laurel Mall. At the park, local residents can enjoy fishing, biking, trails, pavilions, a playground and more.

In 1959, the Community Park Organization established a local park that was meant to be more like a state park, rather than just a playground. The park was planned to feature outdoor recreation and activities for the whole family.

After a 170-acre parcel of land was acquired for the new park, work began on the construction of a 26-acre lake. On July 4, 1962, the lake was dedicated as “Lake Irena” in honor of the late Mrs. Irena Correale. The Pennsylvania Fish Commission stocks the lake with native fish species and many people enjoy fishing there.

The park has been continually improved since then. Pavilions, picnic tables, trails, a playground, benches, bike racks, a fence and grills have been added and improved. The bathrooms have been remodeled and made handicapped-accessible, and a swing for handicapped residents has been added.

A stage and new pavilion were constructed in 2005, and new playground equipment was added in 2007. More recently, the Hazleton Lions Club built another new pavilion at the park.

The park also features soccer fields, constructed in 1997. The Hazle Township Supervisors and Recreation Board worked with the Hazleton Soccer Association in adding this amenity to Community Park.

Hazle Township also placed a gazebo and gardens at Inspiration Park, located at the corner of 23rd and Laurel Streets not far from the Hazle Township Municipal and Commons buildings. The park also includes benches, trees, perennials, and stone and large rocks that serve as barriers.

Nature lovers can enjoy the beauty of Hazle Township by taking a hike or bike ride on the Greater Hazleton Rails to Trails. The entrance to the trail is located on Route 93 one mile past Lehigh Valley Hospital-Hazleton. Large portions of the first seven miles of the trail run through Hazle Township, including parts of Stockton, Ashmore and Hazlebrook.

The Rails to Trails Committee started in 1998 under the Greater Hazleton Civic Partnership, newly formed that year under the auspices of the Greater Hazleton Chamber of Commerce. The committee’s goal was to find and develop a public hike and bike trail along abandoned rail beds left over from the coal era. Since its inception, Hazle Township has assisted the Civic Partnership in securing funding for the trail and has loaned equipment to the organization for various work on the trail.

The Recreation Board is made up of nine volunteer members of the community who are appointed by the Board of Supervisors. The board meets the first Wednesday of the month.

The board’s prime responsibility is the maintenance, improvement and management of the Hazle Township Community Park. The board also sponsors numerous recreational events throughout the year, such as Easter egg hunts and Halloween parades.

The board’s activities are funded by the township budget, grants, donations, gifts, pavilion rentals and snack sales. Many other civic and business groups throughout the region also contribute to the park. In 1997, No. 1 Construction Company and members of Carpenters Union Local 76 constructed a handicapped-accessible fishing pier. A United States Army tank was acquired; in working with our local veteran and civic organizations, this tank was permanently placed and dedicated to our servicemen and servicewomen.

There is a veterans memorial located just off the parking lot. Bricks may be purchased for $100. Applications are available at the Hazle Township office. 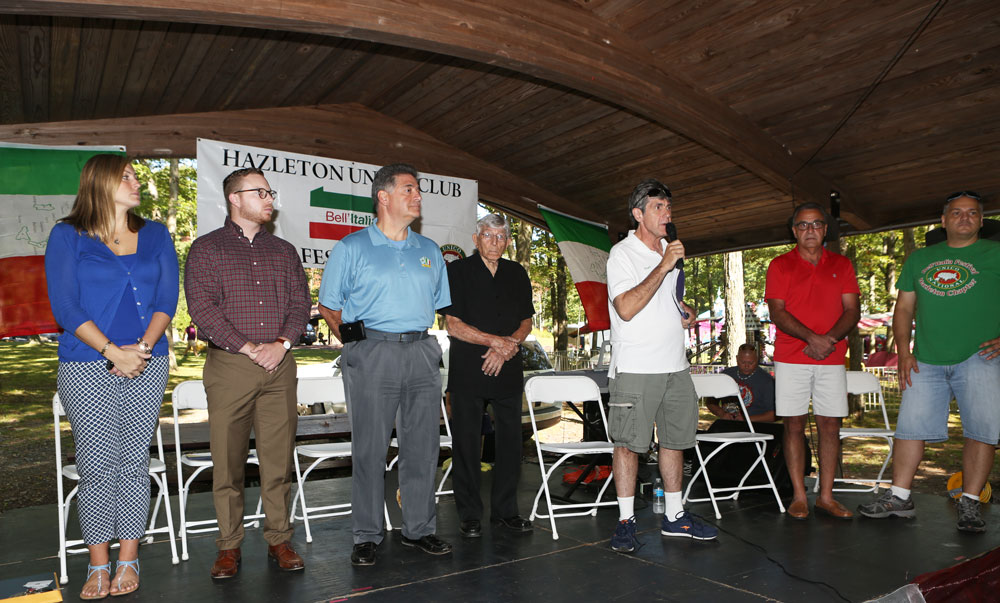 The park is an excellent spot for families, groups and individuals to enjoy a variety of activities throughout the year. Pavilion rentals are available. Please call 570-453-2467 to reserve a pavilion. Click here to download the Community Park Pavilion Rental form.

The township is also home to the Anthracite Model Railroad Club, which hosts open houses throughout the year. The two-level layout displays Greater Hazleton in the 1940s, allowing the club to use both diesel and steam locomotives. The club's building is located on Hanover Court off 22nd Street in Hazle Township.

Choose from activities and events such as:

Hazle Township is located within just a few hours of east coast beaches, New York City, Philadelphia and Washington, D.C. With so much to see and do, it’s a great place to call home!